When approaching art or the history related to it, certain questions arise. Such as the who what when where and significance of the object of work of art in question. I think that with jewelry, the questions center more on perhaps the significance of the object. Who was it made for? Was it funerary? Meant to be worn in death and the afterlife? Was it related to weddings or births? Oftentimes, the design alone can tell us.
Jewelry in Ancient Greece falls under both of these categories and more. It is beautiful. It is meaningful. And can help art historians on their journey to discover even more about a civilization which has captured curiosities for ages. 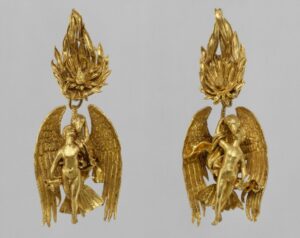 Much of the jewelry in Ancient Greece, the Hellenistic Period specifically (approx. 323 BC-31BC), was comprised of gold. While gold was used before this period, the arrival of gold into larger quantities into the circulation of the Hellenistic Period goods marked part of the significance of Alexander the Great’s conquering of the Persian Empire.

Many different types of jewelry existed during this time: hair ornaments, thigh and arm bands, earrings, rings, pins and pendants, and necklaces. Besides gold, gemstones, semi-precious stones and pearls often decorated the ornamental pieces. The necklace below showcases the use of gold, gemstones, pearls, and an animal design of a butterfly. The different shapes of the gemstones set in gold make this piece stand out. 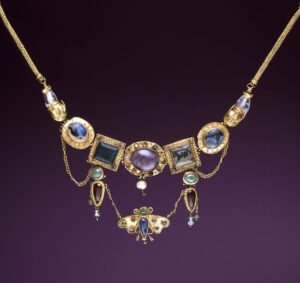 Motifs in Ancient Greece
Many of the motifs involved Greek gods, or plants and animals, such as the set shown below. The elaborate design(s) on the set include Dionysus (the god of wine) and his wife, Ariadne. Likewise, the motif on the earrings is of a muse playing a lyre sitting above the crescent shape of the set. 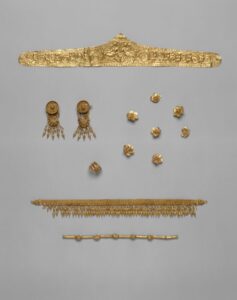 Animal motifs were as common as those of the gods. Below, two sets of golden rams adorn these bracelets; the heads of the ram(s) extend out of ornately designed collars while the base is made of polished rock-crystal which has been shaped to appear as if it is twisting. 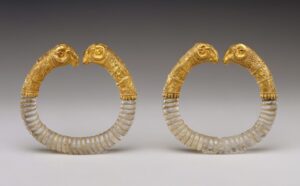 Like the rams’ heads above, this necklace located at the Walters Art Museum in Baltimore, Maryland utilizes bull heads in its design. The necklace also uses a garnet gemstone, tying together much of what makes Hellenistic period pieces identifiable and what has been discussed in this article thus far…from Persian influences to Ancient Greek motifs.

Jewelry was worn both in life and death; pieces were therefore created for both, worn in both, or meant as just a part of burial. Much of the best-preserved pieces of jewelry come from tombs where the dead were buried in their personal pieces.
The above necklace with butterfly pendant was found on the deceased. Because Ancient Greeks believed the butterfly to represent their psyche, or soul, it was often used in burial to represent the leaving of one’s soul from their physical body.

However, pieces were often created with specific purposes in mind; death being just one specific use. But what about life? And marriage? 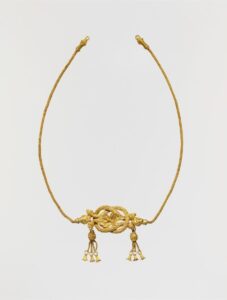 In Ancient Greece, the Herakles Knot is symbolic of marriage, otherwise known a marriage-knot, and was a representation of the virginity of the bride, as the groom would have taken off or untied the knot worn by the bride.

back to blog archive

Send us your inquiry

Feel free to ask questions about our products and services

Orfanos Jewel offers you a unique customized experience! Contact us for a private shopping meeting with one of our jewel experts and stylists.

We are using cookies to give you the best experience on our website. Find out more or switch them off in settings.

This website uses cookies so that we can provide you with the best user experience possible. Cookie information is stored in your browser and performs functions such as recognising you when you return to our website and helping our team to understand which sections of the website you find most interesting and useful.

Strictly Necessary Cookie should be enabled at all times so that we can save your preferences for cookie settings.

If you disable this cookie, we will not be able to save your preferences. This means that every time you visit this website you will need to enable or disable cookies again.

This website uses Google Analytics to collect anonymous information such as the number of visitors to the site, and the most popular pages.

Please enable Strictly Necessary Cookies first so that we can save your preferences!